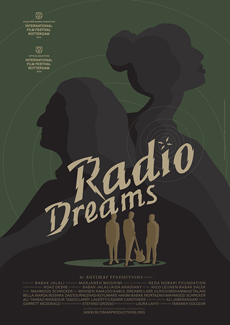 It’s a big day for the little radio station Pars Radio, broadcasting in Persian from San Francisco: Metallica is going to jam in the studio with Kabul Dreams, the first rock band from Afghanistan. But first, everyday life intervenes, in a dryly comical way.

Babak Jalali was born 1978 in Northern Iran and has lived mainly in London since 1986. He received a BA degree in Balkan/ East European Studies and a Masters Degree in Politics from UCL, University of London. He graduated with a Masters In Filmmaking from the London Film School in 2005. As writer/ director, Jalali's graduation short film 'HEYDAR, AN AFGHAN IN TEHRAN', was screened at 60 film festivals worldwide and received a BAFTA nomination as Best Short Film in 2006. He was selected as of six residents at the CANNES FILM FESTIVAL CINEFONDATION RESIDENCE in 2006-2007. In the Residence, he developed his first feature film titled FRONTIER BLUES. The film premiered in Official Competition at the Locarno Film Festival in 2009 and went on to screen at over 30 festivals worldwide including Gijon, Sau Paulo, Stockholm, Ghent, Sofia, New Directors/ New Films in New York, San Francisco and Edinburgh. FRONTIER BLUES won the FIPRESCI award at the San Francisco International Film Festival. He recently completed his 2nd feature film titled RADIO DREAMS, which won the TIGER COMPETITION at the Rotterdam Film Festival in 2016. He is currently in pre-production on his third feature film titled LAND, which is a co-production between Italy, France, Netherlands and Mexico. The film won the main production grant at Frameworks in the Torino Film Lab as well as receiving funding from CNC aides aux cinemas du monde (France), MiBACT development and production grants (Italy), RAI Cinema Production Fund (Italy), MEDIA development fund, Doha Film Institute production grant, The Netherlands Film Fund and Eurimages production funding. BAC Films will be the sales agents for the film. Jalali co-produced WHITE SHADOW (directed by Noaz Deshe) which won the Lion of the Future Award for Best Debut Film at the Venice Film Festival in 2013 and also screened in the World Narrative Competition section of Sundance Film Festival in 2014. Jalali also produced SHORT SKIN (directed by Duccio Chiarini) which was developed at the Venice Biennale Lab and premiered at the Venice Film Festival in 2014 and in the Generation Section at the Berlin Film Festival in 2015.