Deleted from the Biography 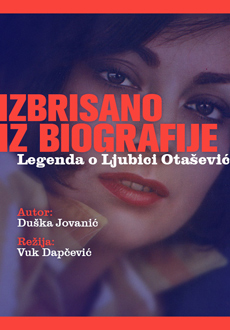 A documentary about a famous Red Star basketball player and one of the greatest femme fatales in Serbia at that time - Ljubica Otašević. Even Ivo Andrić, a great writer, used to go to Mali Kalemegdan because of her. The film was shot on many different locations – from her hometown Mladenovac and Belgrade, to Rome and Marbella, where there are witnesses who tell stories about her glamorous lifestyle and friendships with Frank Sinatra, Marlon Brando, Princess Soraya, Jesus Gil, Countess Gunilla von Bismarck and many other members of jet set all over the world.

Vuk Dapčević graduated (BSc) from FAMU in Prague in 1989 and completed his Masters degree in 1991. He worked as a cameraman and director at National Serbian Television, at TV Politika (Belgrade) as editor in chief, head cameraman, art director and documentary program editor. He also worked as production director for Freemental Communications and Draftfcb Afirma from Belgrade. He worked as a cameraman in Germany and Switzerland. During his career he made more than 200 TV commercials, TV reports and documentary and travel stories. Vuk Dapčević did numerous TV interviews with leading international public figures such as Joe Pytka, a filmmaker, Malcolm McLaren, a musician and impresario, Maurice Saatchi, an advertising giant, Sir Robert “Bobby” Charlton, a former football player, Yoko Ono, an artist, Dennis Hopper, an actor, Al Gore, a politician, Michael Patrick King, a producer (Sex and the City), Kofi Annan, a diplomat, Spike Lee, a director, David Plumb, a mediator, and many more.