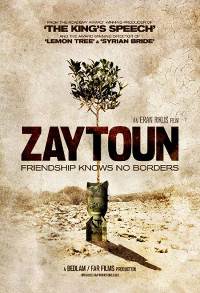 ZAYTOUN is the story of an unexpected encounter between a Palestinian refugee (12) and Israeli fighter pilot whose plane was shot down over Beirut in 1982. Their initial suspicion turns into friendship as they cross all the war-torn Lebanon during a journey to a land they both see as their own.

Eran Riklis is one of Israel’s most acclaimed filmmakers. His most recent film as director is PLAYOFF (2011), an Israeli-German-French co-production shot on location in Germany, based on the life of basketball coach Ralph Klein, starring Danny Huston. The film premieres in competition at the Montreal Film Festival. His previous film THE MISSION OF THE HUMAN RESOURCE MANAGER (2010), an Israel-France- Germany co-production, was shot in Jerusalem and Romania, won 5 Israeli Academy Awards (including best picture and director) and the Audience Award in Locarno, and was released worldwide to great success. As director-producer and cowriter, Riklis enjoyed wide international success with LEMON TREE (2008), winner of the Audience Award at the Berlin and San Sebastian film festivals. The film was supported by major European backers such as Arte France Cinema, ZDF-Arte, Canal+, NRW, the Israel Film Fund, CNC and more.

THE SYRIAN BRIDE (2004) also enjoyed worldwide critical and box office success and won 18 international awards, including Best Film in Montreal and Audience Favorite at the Locarno Film Festival. It was supported by the same backers of Lemon Tree and likewise co-produced with France and Germany.

Previous films include the award winning, widely seen CUP FINAL (1992, presented in Venice and Berlin), ZOHAR (1993, the biggest Israeli box office success of the 90s), TEMPTATION (2002, based on an Israeli bestseller), VULCAN JUNCTION (2000, a nostalgic rock & roll film set in 1973) and the political thriller ON A CLEAR DAY YOU CAN SEE DAMASCUS (1984). Riklis co-produced the films THREE MOTHERS (2006), BURNING MUKI (2008) and the 26 episode TV series ROOM SERVICE (2008-9), also created by Riklis. He is currently involved as producer in the films THE DEAD OF JAFFA by Ram Loevy, THE HOMECOMING by Makram Khoury and AVI DABAH AND THREE SISTERS by Suha Arraf. He is preparing several new projects as director.

Riklis created and directed the TV series The Truck (2005, 13 episodes), numerous major TV series and dramas such as Cause of Death: Murder, Me and my Family, Lucky, Lethal Money and award winning documentaries such as Borders, Muck & Moonshine, Sore Throat and The Poetics of the Masses.

He has also directed well over 300 commercials and various promotional films in Israel and the UK. Riklis is a graduate of the NATIONAL FILM SCHOOL in Beaconsfield, England (1982) and also studied at the film department of the Tel Aviv University (1975-1977).