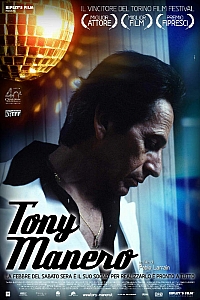 Synopsis:
Raúl (masterfully played by Alfredo Castro) is obsessed with John Travolta's Tony Manero character from Saturday Night Fever. He is often the only audience member at the cinema, where he repeats the dialogue in an effort to "become" Tony Manero, hoping to win a look-alike contest that is being held on television. He and his "sort of" girlfriend Cony (Amparo Noguera), along with her daughter Pauli (Paola Lattus) and Pauli's boyfriend Goyo (Héctor Morales), practise a dance routine that they hope to perform at a humble bar owned by Wilma (Elsa Poblete). Raúl becomes fixated on getting a floor that lights up like the one in Saturday Night Fever, and the extents to which he will go to achieve this aim may even include murder.