The Old School of Capitalism 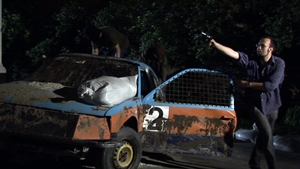 The Old School of Capitalism is rooted in the first wave of workers revolts to hit Serbia since the advent of capitalism. Desperate workers bulldoze through factory gates and are devastated to discover the site looted by the bosses. Eccentrically escalating confrontations, including a melee with workers in football shoulder-pads and helmets and boss and his security force in bulletproof vests, prove fruitless. Committed young anarchists offer solidarity, take the bosses hostage. A Russian tycoon, a Wall Street trader and US VP Biden’s visit to Belgrade unexpectedly complicate events that lead toward a final shock. Along the way, the film produces an increasingly complex and yet unfailingly lively account of present-day, in fact, up-to-the-minute struggles under the misery-inducing effects of both local and global capital.

From the late 60s, his socially engaged films and documentaries in former Yugoslavia earned him critical accolades but also censorship in the 70s for his unflinching criticism of the government apparatus.