The Man From London 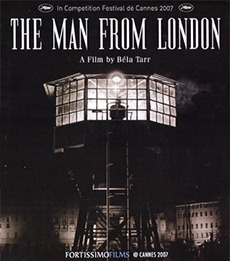 One night Maloin, a switchman at a seaside railway station, witnesses a terrible murder. The murderer fled when he heard the sound of the control room’s sharp and loud creaking sound. The victim sank into the water, clutching a suitcase in his hand. This leaves Maloin to fetch the suitcase, since nothing could be done to save the drowned man. He takes it up to his control room and opens it: it is packed with money. He does not go either to call the police or fetch the murderer; he just stares at the pile of money. Then he hides the suitcase in his closet and locks it. At dawn, when his colleague arrives, he acts as if nothing had happened. He returns home on his usual route. Nevertheless, this path is not the same anymore.

Béla Tarr got into filmmaking as an amateur when he was 16. His early work soon attracted the attention of the Hungarian studios. His well-known TV adaptation of Shakespeare’s MACBETH proved that his work gained a distinct visual identity and metaphysical perspective, reminiscent of Tarkovski’s work. Soon after this, he created his most famous films: DAMNATION, followed by the legendary several-hour film SATANTANGO, which took him seven years to complete, and then the more recent work, such as WERCKMEISTER HARMONIES, THE MAN FROM LONDON and THE TURIN HORSE.