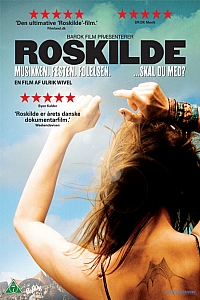 Synopsis:
Every year festival people of all generations from the world over gather on the fields surrounding Roskilde to step into a mutual party and release the human beast. Step into the most sacred room of one of the biggest and most renowned festivals in Europe. Experience the festival through the eyes of the artist, the volunteer and the guest, when a simple field is transformed into a musical centre of energy in which the ecstasy culminates and boundaries are crossed.
Human nature meets animal behavior - love and joy meets tragedy and sorrow. Roskilde is a distillation of more than 8 years of filming from one of the world's best music festivals. Rufus Wainwright, Sonic Youth, Franz Ferdinand, The Streets, Placebo and many more are performing some of the best performances of their lifes.