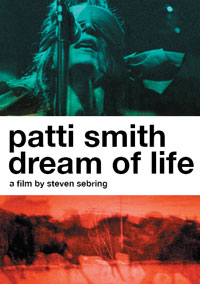 Synopsis:
Dream of Life is a plunge into the philosophy and artistry of cult rocker Patti Smith. This portrait of the legendary singer, artist and poet explores themes of spirituality, history and self expression. Known as the godmother of punk, she emerged in the 1970's, galvanizing the music scene with her unique style of poetic rage, music and trademark swagger.
We follow this multitalented and private artist over 11 years of international travel, through her spoken words, performances, lyrics, interviews, paintings and photographs. Dream of Life reveals a complicated, charismatic personality. Patti Smith who narrates the film, wrestles with life's many paradoxes. She defines the human experience as an overwhelming contradiction. She pulls the strings of her guitar and simply makes music.