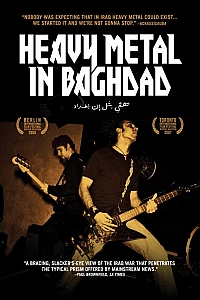 Synopsis:
In the late summer of 2006, in the middle of the insurgency, filmmakers Eddy Moretti and Suroosh Alvi traveled to Baghdad to meet and interview the only heavy metal band in Iraq, Acrassicauda. Heavy Metal in Baghdad is the story of the band and its members, young Iraqis whose lives have been distorted and displaced by years of continual warfare in their homeland. The filmmakers have collected glimpses into the struggles of Acrassicauda as they try to stay together and stay alive. Their struggle is the untold story of the hopes and dreams of an entire generation of young Iraqis.