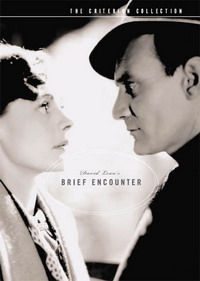 Synopsis:
Laura (Celia Johnson) is a seemingly happy, middle-class housewife who meets the equally married physician Alec (a young Trevor Howard in only his third screen role) when he removes a speck of dust from her eye at a London railway station. The pair soon find themselves drawn together through weekly meetings at the station cafe, their casual encounters blooming into a chaste love affair marked by intimate conversation, longing glances--and the tragic realization that neither of them will be able to break the bonds of social propriety that keep them wedded to other people. Seen by some as quintessentially English, Lean's achingly lovely exploration of the conflicting demands of personal happiness and social responsibility remains nonetheless universal and timeless. Johnson and Howard's nuanced performances, Robert Krasker's shadowy cinematography, and a soundtrack of hauntingly romantic Rachmaninov piano concertos only add to the film's aura of quiet desperation.