The Princess and the Frog

The Princess and the Frog

The Princess and the Frog is inspired by the tale The Frog Prince written by the Grimm brothers. But filmmakers gave the story their own twist.

In its latest creation The Princes and the Frog, Walt Disney Studio presents a fun mixture of an adventure story, intriguing characters, uncommon comedy and unforgettable music. The story of this animated comedy takes place in New Orleans. The makers of The Little Mermaid and Aladdin, created a modern version of a classic story in which a beautiful girl named Tiana (Anika Noni Rose) appears, a frog prince who desperately wishes to be human again, and the kiss which will determine their destiny and take them both into a hilarious adventure through mysterious river delta in Louisiana. The Princes and the Frogmarks the beginning of the return of hand-made animation by the distinguished team of John Musker and Ron Clements. The music was composed by Oscar winner Randy Newman. 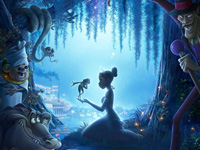