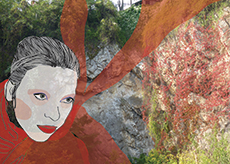 A professor takes a group of students on a trip to an abandoned stage in a park, with the intention of finding a scenic setting for the production of the opera "Narcissus and Echo" by Anja Djordjevic. Boris, one of the students, thinks it would be a better idea a to make a film that uses existing recordings of the opera, but with a new story based on the ancient Greek myth about a young man in love with his own reflection in the lake. The relations between the students involved in the project and the surrounding events meld with the plot of this potential film, accentuating the various narcissisms and the overall inability to suppress vanity and find real human contact.

Screenwriter for documentary TV series and short films by Goran Gajić (In the Whirlwind of Passion, Seventh Day) and Dinko Tucaković (The Letter). He has (co)authored a dozen books about film, as well as a novel "Divlje senke" (Wild Shadows, 2002). He worked as an assistant director to Teo Angelopoulos during the filming of Ulysses' Gaze (1995). He has co-written the screenplays for the feature films Land of Truth, Love & Freedom (2000) and South by Southeast (2005) and directed and wrote the screenplay for the film Kisses (2004).