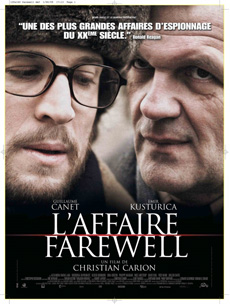 In 1981, Colonel Grigoriev of the KGB disenchanted with what the Communist ideal has become under Brezhnev, decides he is going to change the world…Discreetly, he makes contact with a French engineer in Moscow and little by little passes on documents to him - mainly concerning the United States - containing information which would constitute the most important Cold War espionage operation known to date.During a period of two years, French President, François Mitterrand, was to personally vet the documents supplied by this source in Moscow, to whom the French Secret Service gave the codename « Farewell ». In his own way, Farewell managed to change the world, by avoiding traditional espionage methods too well known to the KGB and by not asking for any financial compensation whatsoever – much too capitalist for his taste. He simply followed his destiny, so that a newworld might dawn for all his fellow Russians, but especially for his son.

Born in 1963 in Cambrai (Northern France). He directed his first feature in 2001, Une hirondelle a fait le printemps, starring Michel Serrault and Mathilde Seigner. In 2005, his second feature, Merry Christmas was highly acclaimed during its presentation in official selection at the 2005 Cannes festival. The film continued its career in Hollywood, representing French Cinema at the 2006 Oscars ceremony and also at the Golden Globe Awards. In 2008, he began shooting the Farewell affair (considered by Ronald Reagan to be the most important espionage affair of the 20th Century) starring Guillaume Canet and Emir Kusturica, for whom it was his first major role in cinema.