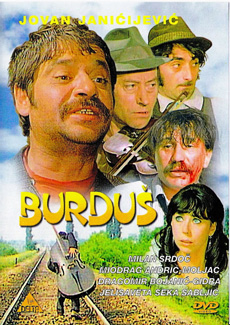 Three poor musicians, fair entertainers, become famous and rich persons, due to a TV-show participation. Unexpected success and money will divide old friends. Bass player, Burdus, lonely and lost, decides to go and find new friends. His old friends join him at the station and, having found themselves again, rejoice in train in their Gypsy manner.

Mića Popović was born on 12 June 1923 in Loznica. He finished grammar school in Belgrade. After the Second World War, most of which he spent in Belgrade working at odd jobs, he enrolled the Academy of Fine Arts in Belgrade in 1946, in the class taught by Ivan Tabaković. Together with Bata Mihajlović, Petar Omčikus, Mileta Andrejević, Ljubinka Jovanović, Kosara Bokšan, and Vera Božicković, he went to Zadar in 1947 and formed the famous "Zadar group". After returning to Belgrade, they were forbidden to return to their university studies, as the authorities viewed the work of the Zadar group as subversive, but sometime later, they were all allowed to return except for Popović, who continued to study on his own, with the help of Tabaković.

As a painter, Popović is best known for his informel period (1958-1968) and his "Scenes Painting" (slikarstvo prizora) (from 1968). Among the Scenes Paintings, the most famous may be "May 1, 1985," which memorialized events surrounding an alleged attack on a farmer in Kosovo named Đorđe Martinović.

He also made several films in the 1960s, two of which ("Čovek iz hrastove šume" and "Delije") were banned by the government for their unacceptable content.

Mića Popović was elected a regular member of the Serbian Academy of Sciences and Arts in 1986.