A Matter of Size

A Matter of Size 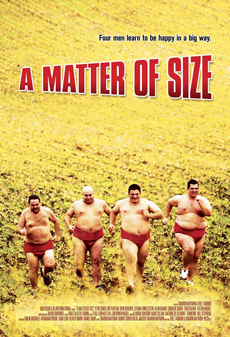 A group of fat people from the Israeli city of Ramla is fed up with the dictatorship of diets. They leave their dieting club and discover the world of sumo, where fat people like them are honored and appreciated. "A Matter of Size" is a movie about the coming out of the closet of fat people and about their ability to accept their fatness and relate positively to their body through the world of sumo.

Erez Tadmor, born in Israel in 1974, is a writer and director of short and feature films. 1999 he graduated from the "Camera Obscura" film school in Tel Aviv.

Sharon Maymon was born in Ramle, Israel. He graduated of Camera Obscura College of Arts in Tel Aviv in 1999.