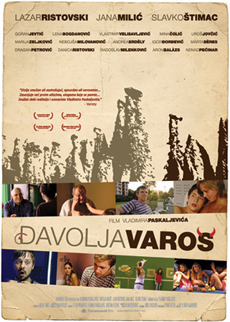 A multiple winner “Devil’s Town” is a contemporary black comedy which satirizes modern Serbian society but the story itself is universal since it can be applied to any society going through a crisis. It presents several destinies which intersect on a day renowned Serbian tennis players participate in an important tournament.

Jelena is a poor girl who is trying to afford tennis lessons no matter what, therefore tolerating indignities coming from prideful Ivana, daughter of a rich prostitute. A rich teenager realizes he can’t by love and that his girlfriend really left him for good. He can’t accept that fact and becomes violent. Ex emigrant returns to Belgrade and tries to start a business investing his whole savings in real estate construction but soon realizes he’s working in a world of corruption and racketeering. Prostitutes are those who have money, but they only feign happiness. Daughter of one of them tries to find her father. A taxi driver blames the whole world for his personal tragedy. He has a list of people he considers guilty for his misery and starts his revenge.

Next to renowned actors such as Lazar Ristovski, Slavko Stimac, Goran Jevtic and many others, the film introduces new, young actors like Uros Jovicic, Marija Zeljkovic and Mina Colic.

Vladimir Paskaljevic graduated direction at Faculty of Dramatic Arts in Belgrade. For his short student film “The Dolphins are Mammals” he received several international awards. He also published a collection of short stories “The Optimists” in 2006. His father, Goran Paskaljevic used it as a material for the film of the same name, which received many awards and recognitions.