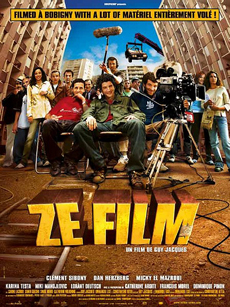 Visitors of the Festival will have a chance to see Guy Jacque’s excellent comedy “Ze film” which will be screened at Katolicka porta open-air cinema at 23:15h, after the screening of Jasmila Zbanic’s “On the Path”. Guy Jacques will greet the audience of Cinema City, who will have this unique opportunity to hear, first hand, of his work and accomplishments as well as his personal impressions of the Festival.

Guy Jacques directs films that distinguish themselves by their unusual stories, originally designed characters and quality humor. Our audience remembers Jacques from his supporting role in Goran Paskaljevic’s popular film "Cabaret Balkan". This famous French director and screenwriter is also a jury member for Exit Point selection. “Ze Film” also stars one of our most distinguished actors, Miki Manojlovic.

A young Parisian with a symbolic moniker Kubrick dreams of shooting a film together with his two best friends, Karim and Toxic. His dream also entails the screening of the film at Cannes Film Festival, walking down the red carpet with his two friends and winning a prestigious Golden Palm. However, all of them come from French ghettos where opportunities for such an endeavor are scarce. Astonishingly and despite everything, through numerous adventures they’ll be able to make that dream come true in the true sense of the word.