“The Ramones” on the Big Screen 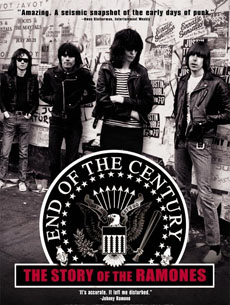 Planet Rock selection presents a fascinating documentary on legendary band Ramones, “End of the Century”, gives a unique portrayal of seventies music scene and tells a story about eccentric group of people who met and made one of the most influential bands in the history of music. The name of the film comes from the Ramones’ fifth album and many critics call it celluloid love letters to these heroes of the punk scene.

The Ramones were renegades who, for twenty years, remained unchanged, with unaltered appearances and sound and they influenced a great number of bands who came after them. The film gives an insider’s story about their growing up in working families and about their dreams to one day become great stars of the hard-core scene of Manhattan. Film authors Fields and Gramaglia showed a raw, bitter relationship among band members, which left a mark on their lives but also influenced them to create unparalleled music which they left to their fans.

Exclusive footage as well as interviews with members of the band and many influential names from the music scene present a special contribution to the memory of a great era in music.