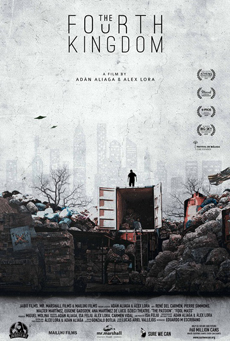 Synopsis:
The Fourth Kingdom is the kingdom of plastics, a redemption center in NY for immigrants and underdogs where the American Dream becomes possible indeed. Through the stories of Rene, a Mexican immigrant who can't go back to his country as a loser; Pier, an African-American guy who has found happiness in the social stigma; Eugene, a disabled man who has spent 40 years in the streets; and Walter, a mysterious person who came walking from El Salvador... we revisit this particular planet and their inner worlds.
Director:
Adán Aliaga
His first documentary film My Grandmother’s House, 2005, won several international awards, including the Joris Ivens Award at the IDFA Documentary Festival. Since then, he has filmed five feature films, obtaininig different national and international awards and mentions, including Pilar Miró Award for Best Debut Film at the Valladolid International Film Festival, Best Documentary at Alcances Film Festival, Best Film in the Madrid PNR Film Festival and Special Jury Mention at Málaga Film Festival.
Àlex Lora
His first feature documentary Thy Father's Chair premieres at IDFA in Amsterdam in 2015. His films screened twice at SUNDANCE Film Festival aspart of the Official Selection and his work has received over 100 awards and mentions, including the New York Emmy Award. He was a finalist for the Oscars - Student Academy Awards and for Gaudi Award from the Catalan Academy.