Peter Gabriel Back To Front 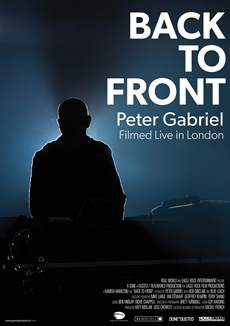 The outstanding new concert film from Peter Gabriel, Back to Front celebrates one of the most pioneering and innovative artists of modern times. Directed by BAFTA winning director Hamish Hamilton, the film gives cinema audiences an exclusive front seat as it captures the excitement of a spectacular live performance. It also brings a deeper insight into Peter Gabriel the artist by expanding on many of the live show’s themes through its use of subtle reportage and supplementary interviews with all the key protagonists. Filmed live in October 2013 at London’s O2, Peter Gabriel reunited with his original touring band from 1986 to mark the 25th anniversary of the landmark album So. The concert includes classic hits Solsbury Hill, Digging in the Dirt, Sledgehammer, Mercy Street and Don’t Give Up.