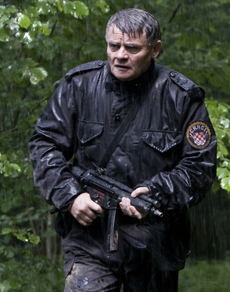 “The Blacks” by Zoran Juric and Goran Devic chose for a theme one of the most frequently overlooked and the darkest aspects of war in Croatia. Those about whom only timid whispers and rumors could be read in newspapers, those who were intentionally overlooked by the politicians.

A trend in Croatian film called spreading the truth on war effectively began with Vinko Bresan’s “Witnesses” (2003), continued with Kristijan Milic’s “The Living and the Dead” (2007) and culminated with Juric’s and Devic’s “The Blacks”. The story which follows special military unit, obviously a paramilitary unit, operating on the frontline, from Osijek to Sisak (incidentally, directors’ respective places of birth in 1971) is told through directorial minimalism, suggestively and functionally, with superb support of an excellent team of actors and with a steady eye of cinematographer Branko Lint.

Heroes are seen dressed in intimidating black uniforms, in manner of characters from “Southern Comfort” or even heroes from “The Living and the Dead”, roam around the woods, fully armed and lead by Ivo, whom they simply call “boss” (outstanding Ivo Gregurevic) who leads them bewilderedly in search for their fallen comrades and into vindictive diversion, breaking the armistice general Anton Tus signed with JNA.

Juric and Devic reveal a lot about their film heroes, connected only by mutual dishonest war actions. Discrete, muted and almost accidental glance at bloody walls and floors of a garage reveal more on nature of their “business” than any explicit scene of torture and murder could. Thus Juric and Devic managed to smartly and functionally imply that “the blacks” are the ones that killed people whose names were on black lists and all unfavored civilians, therefore alluding to current Osijek “garage case” for which Branimir Glavas received a ten year prison sentence.