On the eighth day of the Cinema City 2012, at Serbian National Theatre, after the closing ceremony and award presentation at 20h, you can see a special screening of a multiple award-winning film signed by Ken Scott – “Starbuck”. The film presents a forty-two year old “teenager”, who, after finally deciding to take control of his life, discovers he is the biological father of 533 children! This remarkable and very funny film story will, though laughter and great atmosphere that marked all the previous days of the Festival officially close the fifth edition of the Cinema City. 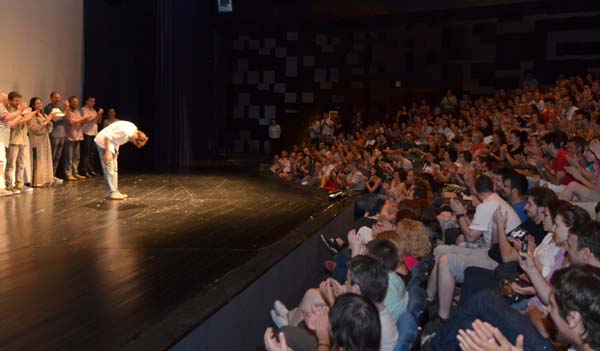 The Cinema City International Film Festival once again managed to make a step forward in its programming, by choosing a unique way of presenting its audience the extraordinary film accomplishments that made notable appearances at some of the most prestigious international film festivals. Through the interest of the visitors for the films and their active participation at successful Q&A programmes, the Cinema City once again proved that domestic audience remained true to a quality repertoire and open for a wide range of film visions and experiments in film language. Fully-packed cinemas and pre-sold tickets, especially for the screenings of the National Class selection, guest appearances of board members of the European Film Academy, notable European authors, such as Andreas Dresen and Davide Manuli, master-classes on original topics, held by notable domestic and foreign film professionals within the Cinema Now Live Academy programme, marked in the best possible way this year’s edition of the Cinema City festival!