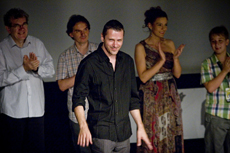 Predrag Velinovic’s “Motel Nana” had its premiere last night at Cinema City Festival in Novi Sad. In fully packed Pera Dobrinovic Hall of Serbian National Theatre, we saw the unraveling of love and social drama of two people, spiced with peculiar humor and spirit of Bosnia. What audience thought of the film was best demonstrated with thunderous applause and double encore the film crew received. Audience was equally emotional to both funny and sad parts of the story and after the screening all we could hear were positive reactions and ballots were cast with highest marks. Afterwards we talked with lead actors Dragan Micanovic, Zijah Sokolovic, Nikolina Djordjevic and others, who were also delighted by the entire experience of the premiere and especially by the reaction of audience. Today at 15:30h you can see the repeat projection of “Motel Nana” at Serbian National Theatre.