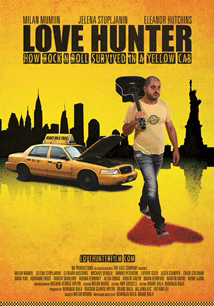 Love Hunter is the story of Milan Mumin, a larger-than-life frontman of a hugely influential Serbian band Love Hunters who, during the nineties, galvanized young generations fighting an oppressive regime. Ten years later, Milan is in New York City, driving a taxi to pay for his first American album. Milan takes us on a bumpy ride as he rides all over NYC picking up a motley crew of passengers to scramble money for his recording. He loses a bass player and has to sift through New York musicians until he finds a promising replacement - and a romantic spark in a free-spirited female bassist. Just as the rehearsals start picking up steam, Milan’s longtime Serbian girlfriend arrives with very different plans for their future.