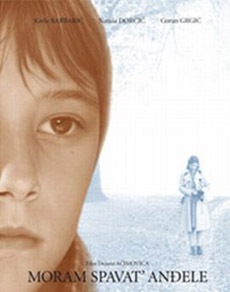 Film “I Have to Sleep, My Angel” is a family drama with chapters of collective Yugoslav experience which deals with a destiny of multinational family living in the seventies, in a period of active Titoism. The story is placed in a small Herzegovinian town where lives Goran, a young boy, whose father is a Croat, and mother is Serbian, with extensive family comprised of Orthodox Christians, Catholics and Muslims, who more or less live without discord under the strict supervision of communist grandfather.

At the beginning, Goran faces all the common denominators that can be expected from a nostalgic postyugoslav retro film (way of life, prophetic basketball games, Tito’s speeches…). Gradually, Acimovic guides the story further and deeper into a complex divorce drama observed from child’s point of view. Script is signed by Acimovic’s sister Tanja, who is also film’s chief producer.

Acimovic’s documentary “Go For It” that tells a story of exceptional results of a disabled athlete, points out to director’s maturity and great humanity with which he approaches this delicate subject.