This past week has seen some great films and an even greater audience, which enjoyed such feats of filmmaking as Panama, Shirt Skin, Love’s a Bitch, Finding Fela, Enclave, The Healing, Kurt Cobain: Montage of Heck, Los Hongos, Masks and many others, while No One’s Child at Amstel Open Air registered a record number of visitors at open air cinemas of the festival. Up to 10,000 Bucks selection, which is screened in Quarter Indoor Cinema, is also well attended. Cinema City and its visitors defied the workweek with the concerts of Jarboli, Darkwood dub, Ragman, fantastic up-and-comers Threesome, Stray Dogg, energetic and charming Iskaz filling out China Town every night under the full moon. During the weekend we will once again screen Panama and other great films as well, such as Naked Island, A Young Poet, Flowers of Evil, Peppi, Luci, Bom and Other Girls like Mom, Street Musicians, Industrial Soundtrack For The Urban Decay, Little Buddho, Necktie Youth, Monument to Michael Jackson, Off, Open Cage, Depeche Mode: Alive in Berlin, Liza, the Fox-Fairy, Mad Max, The Sky Above Us, The Hope Factory, Flapping in the Middle of Nowhere, Before the Rain, U2: From the Sky Down, whereas music programme will present DJ Flip&Rasheed, Zemlja Gruva, Public П, Vis limunada and VKSHN triphunVSwriter. 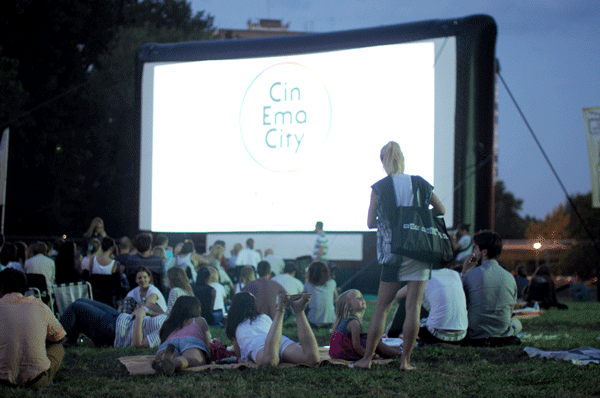 Due to great interest and positive reactions to Panama, Cinema City and the authors and producers of the film agreed to organise another screening on Saturday, July 4, at 22h in SKCNS Fabrika Indoor Cinema. We ask the audience for patience. We also need to point out that those with Cinema City SUPER tickets will have priority since only this ticket ensures a special seat for each of the screenings. Please come on time and get yourself a seat. There will be two entrances, one for Cinema City SUPER/VIP tickets and one for Cinema City package/daily tickets.

Saturday will start at the festival centre, with a free eco-workshop for kids – Magic through Ecology, which is organized by Cinema City and Association for environmental protection Rio.

From 16h to 20h resident skaters will compete in BMX, rollers, and skateboard categories, and the best performer will win EXIT ticket, which is awarded by Cinema City. 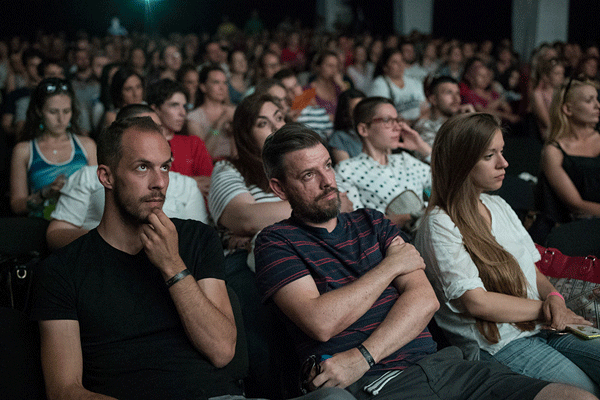 At the festival centre, starting at 18h, we will organize a get-together with the authors of films screened on Friday, Little Buddho, Naked Island, Street Musicians, You’re Ugly Too, and Up 10,000 Bucks. On this occasion, the Pan Transplant association of transplant patients of Vojvodina will present their charter to the Cinema City festival and Milorad Kapor, one of the actors from Little Buddha. From Friday to Sunday, Pan Transplant will have their stand at the festival, where you can find all you wish to know about this programme and sign their donor card.

In the evening, at SKCNS Fabrika and Quarter Indoor Cinema we will organize repeat screenings of Panama, A Young Poet, and Diamond Tongues, and premiere screening of the award-winning domestic film Monument to Michael Jackson and Open Cage. Siniša Galić’s Off will also have its premiere at Cinema City.

For all those who’ve missed great films of some truly creative and ingenious authors from Up to 10,000 Bucks selection can come on Saturday at 18h to Quarter where we will screen Tourist, Fear, and The Loop and wrap up this year’s selection.

At Amstel Open Air you can enjoy fairy tale Liza, the Fox-Fairy, and Mad Max from renowned George Miller, which will be screened as part of Respect to First Films selection.

After the screening of Depeche Mode: Alive in Berlin, which is part of the Planet Rock selection, the Planet Rock Music Stage & Open Air Cinema will present the fantastic band Zemlja gruva, after which Public П will entertain you until the wee hours of the last morning of Cinema City.

Although initially announced, the film Blackness will not screen at this year’s festival due to unforeseeable circumstance. Instead, we will screen Kung Fu Elliot on Friday at 20h and Diamond Tongues on Saturday at 15:30h at Quarter Indoor Cinema.

On Sunday afternoon, we will screen repeats of the films that premiered on Saturday, and premieres of Line of Credit, The Sky Above Us (out of competition), and The Hope Factory at SKCNS Fabrika, and Milcho Manchevski’s debut feature Before the Rain and Kung Fu Elliot at Amstel Open Air.

Anyone who loves Depeche Mode can see Depeche Mode: Alive in Berlin in Firchie Think Tank studio and stay afterwards for the great music sounds of Uroš Đurić. SKCNS Brod Teatar is the last chance to see Open Cage and films from Up to 10,000 Bucks.

The official closing and awards ceremony of the festival will be preceded by the free screening of U2: From the Sky Down. After the ceremony, you can come to a free concert of Vis limunada, which will bring to China Town the atmosphere of European festivals and boardwalks in late 1950s and early 1960s. The 8th Cinema City festival will close with VKSHN triphunVSwriter, which will provide entertainment until the last visitor leaves and the gates of the festival close until next year.