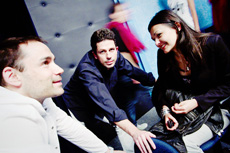 Last night was the opening night for Up to 10.000 selection. After introduction from Srdjan Timarov, audience was greeted by this year’s programme selector, Vladimir Perisic. He pointed out that all the films he selected have something in common: “In a way, all of them are based on encounters. A chance encounter of farmers and students. Heroin addict’s encounter with the sea. Brother meeting sister. An encounter with a young man from the suburbs of Montevideo An attempt of acquainting with the world… these are all films, which stride towards those who are exiled, who don’t have a footing, who don’t have their own vision. And so, something that might as well be mere chance encounter, transforms into a construct of one world, one life, now unraveling not from one person’s, but two persons’ viewpoint.

The great interest audience nurtured towards low budget film these past few years remained, as we could clearly see last night, unaltered. After the screenings, for the first time audience had a chance to participate in Q&A with film authors. Directors Sasa Peric and Marko Cvejic talked on their experiences, directorial mannerisms and hardships of film production.

Our question on significance of budget when creating a film was answered by programme coordinator for Up to 10.000 bucks, Dina Vukovic: “Although low budget sometimes limits a director in achieving his idea, it seems that too much money carries a risk of stretching, resulting in turning attention away from the idea and the meaning of film and towards some additional elements like creating luxurious film sets and costumes etc…”