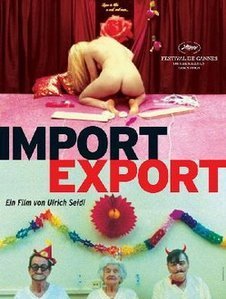 Ulrich Seidl’s “Import-Export” will be screened at Cinema City Festival within Tribute: Austrian Cinema selection. This film was nominated for Golden Palm at Cannes Film Festival 2007. The film deals with relations between east and west, capitalist society and society in transition presented via two parallel destinies happening at the same relation, only in opposite directions.

Seidl was born in 1952. He lives in Vienna, Austria. His work technique through which he achieves the best possible authenticity by presenting people in their most forlorn personal moments initiated a wide debate in the world of film. “Import-Export” is the first film produced by his own production company. The film will screen at Cinema City Festival on June 9th at Youth Theatre’s main hall, at 20:00h.

Tribute: Austrian Cinema selection will present some of the most significant achievements by renowned Austrian directors. Selection was realized with support of Austrian Development Agency (ADA) for the purpose of better acquainting domestic audience with Austrian culture and cinematography. As a part of this cooperation, Austrian ambassador in Serbia, Dr. Clemens Koja will present on June 12, prime award of the Cinema City Festival, Grand Prix for best domestic feature from National Class selection.