“Some Other Stories” in Variety magazine

High-concept omnibus film "Some Other Stories," developed from an idea by Serbian film critic/producer Nenad Dukic, brings together five shorts by young femme helmers from the republics of former Yugoslavia, all incorporating pregnancy in some way. Of variable interest and varying length, the segments don't add up to a cohesive feature, but the anthology format reps a savvy opportunity for the development and promotion of Balkan distaff talent and cooperation between former warring nations. Worthy fest fare could find niche theatrical dates in the region, with more play in ancillary. 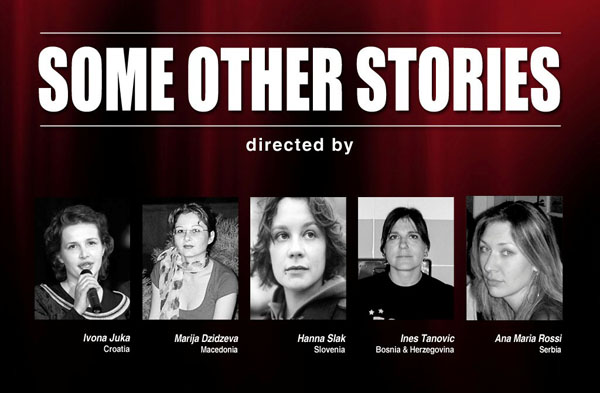 Of the five participating directors -- Ivona Juka (Croatia), Ana Maria Rossi (Serbia), Ines Tanovic (Bosnia-Herzegovina), Marija Dzidzeva (Macedonia) and Hanna Slak (Slovenia) -- only Slak has previously helmed a feature drama. With the exception of Dzidzeva, the women wrote their own scripts, and were free to incorporate the topic of impending motherhood in any way they wanted.

Each segment is titled simply with the name of the country in which the action takes place, and separated from the next by a brief fade to black. The episodes reflect the economic, sociological, cultural and religious differences among the various countries.

Strongest in terms of craft, performance and narrative is the suspenseful "Serbian Story." Tale of an expectant mother (Natasa Ninkovic) sharing an emergency room with a charming killer (Sergej Trifunovic) offers the piquant twist of an O. Henry yarn.

While "Serbian Story" seems complete as a short work, ambitious drama "Bosnia & Herzegovina Story" feels more like an open-ended treatment, with nuanced thesping that suggests complexities beyond the scope of the short running time. The narrative centers on a financially strapped Sarajevo family (Bosnian stars Emir Hadzihafizbegovic and Jasna Ornela Bery play the parents) forced to find a new place to live, while the pregnancy of Dutch U.N. official Hedder (Nina Violic) by the family's proud son (handsome Feda Stukan) is more tangential to the story.

Uneven "Macedonia Story" unfolds in a private clinic where a junkie (soulful-looking Iva Zendelska) battles to keep her baby. Helmer Dzidzeva's hyperreal visuals and poetic framing make an impression despite the risible script.

The longest but least engaging of the five, melodramatic "Croatian Story" follows a mentally unstable painter (Nera Stipcevic) who must decide if she should undergo a "selective reduction" because one of her twins will have Down syndrome. Still, notable production design supports the feeling of two worlds between the painter and her businessman hubby (Goran Bogdan).

Arriving last, the attenuated "Slovenian Story," about a nun (Lucija Serbedzija) with her own version of immaculate conception, ends the omnibus on an awkwardly humorous note. Performed almost as silent comedy (perhaps because Slovenian is not understood by Serbo-Croatian speakers), the segment doesn't rep Slak's best work.