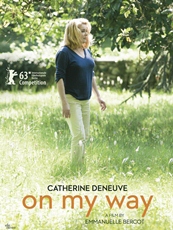 Bettie is in her early sixties. Having run out of cigarettes, she climbs into her car and drives off, leaving her mother, customers and the employees of her Breton restaurant to fend for themselves. But her search drags on. The shops are all shut and Bettie has no desire to return to her old life. She has just learned that her long-standing lover has gone off with a younger woman. And living with her difficult mother is no picnic. Bettie decides to take a break and drives on. She shares a cigarette with an old man and listens to his tragic love story. After a rollicking party she wakes up next morning in a hotel bed, with someone beside her. She gets to know her grandson and winds up with him at a picturesque hotel by the sea, in the midst of a reunion of French beauty queens from the year 1969.

Emmanuelle Bercot wrote the role of Bettie especially for Catherine Deneuve. But with every kilometre Bettie puts between herself and her old life, we forget that we are looking at Catherine Deneuve, international cinematic icon, and simply see Bettie, a woman who wants more from life than just a cigarette break.