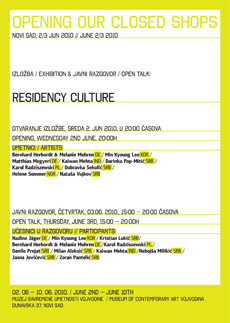 Austrian Cultural Forum and Museum of Contemporary Art, Belgrade, Museum of Contemporary Art of Vojvodina and Clio publishing house are announcing the visit of one of the most significant media theorists and author of the book Virtual Art: From Illusion to Immersion (Clio, 2009), Oliver Grau. Grau will visit our country from 7-10 June and will hold two lectures in Belgrade and Novi Sad.

Oliver Grau is Head of the Department for Image Science at the Danube University Krems (Austria) and a visiting professor at universities around the world. The lectured history of art at the Humboldt University Berlin and University of Arts and Industrial Design Linz. he managed the project "Immersive Art" of The German Research Foundation whose team started developing in 1998 the first international archive for digital art, www.virtualart.at.

His main research is in the history of media art, immersion (virtual reality), and emotions, as well as the history, idea and culture of telepresence and artificial life. He also published Mediale Emotionen (Fischer, 2005) and MediaArtHistories (MIT-Press, 2007). His books are translated in twelve languages. He is a member of German Academy of Sciences Leopoldina and Berlin-Brandenburgischen Scientific Academy.

His book Virtual Art: From Illusion to Immersion shows that the idea of placing someone in an enclosed pictorial illusion space is not a new feature nor is it connected solely to technical inventions of computer generated virtual reality. On the contrary, virtual reality is in the very core of man’s reference to pictures. The book deals with media which are dedicated to all types of pictorial spaces and offers consistent theoretical framework for their analysis with historical overview of virtual reality idea. Grau does not interpret virtuality as an anthropological constant but focuses on pictures of 360o like rooms with murals, panoramas, circular cinemas and computer art.