Indian Director Mukherjee, Winner of the Up to 10,000 Bucks, This Year's Jury Member

Your film Stray Dogs won the best film Award in Up to 10,000 bucks programme selection, what this award did mean to you?

It is really amazing to win the IBIS Statuette at 10,000 bucks programme. I am extremely honored. It was my first award as a filmmaker. Hence the feeling is inexpressible. It will always be very close to my heart. The award gave me strength and belief to grow as a filmmaker and tell more stories.

Can you describe to us what is like to be young film director in India? What are the main obstacles, and what are main incentives?

It is exciting to be a part of the contemporary young film directors in India, where all of us are evolving every moment. We inspire each other; motivate each other. The language and understanding of cinema is going through such a crucial stage in the country that I am feeling fortunate to be a part of the league.

Being an independent filmmaker the obstacles are quite similar that we face every part of the world. But at the same time being in a country like India with such a varied society and culture, one is always thrilled to develop a story. Also like-minded people are gradually coming together to support the young film directors, which is truly exciting. 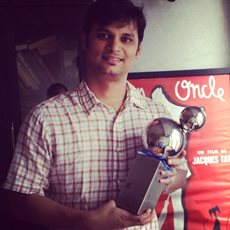 What are you currently working on?

I am currently writing the screenplay for a feature film.

What do you think, is having a low budget limiting film director to express his creativity? What is your experience?

Budget is undoubtedly an important factor, which dictates the creative part of filmmaking. But at the same time one should understand its practicalities, so that it doesn’t become a hindrance.

As an independent filmmaker it is always a challenge to synchronize all the important factors, importantly the budget, which is not an easy job at times.

The whole journey, from conceiving the idea and finally watch it on the screen. It is a very organic process that I enjoy the most.

What are your plans for the future?

Keep on making films on the stories that I will be thrilled to tell.

Atanu Mukherjee is an alumnus of Satyajit Ray Film and Television Institute Kolkata. He has worked as Editor on four feature films: Achal (The Stagnant), Blemished Light, Shortcut Safari and Monsoon Shootout, the last of which premiered at Cannes in 2013. He has directed the documentary My House Is Not So Far, and has also written, directed and edited short films Ekanko (The Monologue), The Gatekeeper and Stray Dogs, which won Best Short Film at the 2014 Cinema City Film Festival in Serbia and was a part of the 2014 International Documentary And Short Film Festival in Kerala.