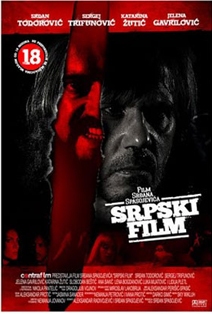 Due to great interest for Srdjan Karanovic’s upcoming film “A Serbian Film”, additional screening will be organized in the night between Saturday, June 6 and Sunday, June 7, beginning at 2:30h at Serbian National Theatre (Pera Dobrinovic Hall). Official outlet for purchasing tickets for projections is Cinema City Box Office, situated at Trg Slobode. Box Office is open every day from 10:00h until 22:00h. The price of the tickets is 150 dinars for screenings at Serbian National Theatre and Katolicka porta. Screenings at other locations are free. We invite all visitors of the Festival to purchase tickets for their selected films in a timely manner.

Lead hero is Milos, a retired porn star. He leads a quiet family life with his wife Marija and their six year old son Petar. During transition in Serbia, in times of great turmoil, he’s trying to make ends meet. A sudden call from his ex partner Lejla will change all that. Aware of his financial difficulties, Lejla introduces Milos to Vukmir – a shady, mysterious and obviously insane producer who is, besides that, politically well connected. Lead role in Vukmir’s new feature will provide him and his family for life. The contract demands of Milos not to know anything about contents of the film. Vukmir pulls Milos into a sequence of incredibly cruel and violent situations, determined to shoot a film never before seen, using people as cannon fodder. Trying to flee from that cinematic hell and to save the life of his family, Milos will have to sacrifice everything he has; his pride, morals, mind and perhaps even his own life. In Serbian “heart of darkness” where life carries no value, in a combat with the enemy both far stronger and pathologically disturbed, his chances of survival are infinitesimal.

WARNING: This film contains extreme and brutal scenes of violence and is not suitable for viewers under 18 and those sensitive to said content.