At this year's Cinema City festival, scheduled to take place between June 25 and July 2 in Limanski Park and Chinatown in Novi Sad, visitors will get an opportunity to explore uncompromising, exciting program focused on up-and-coming authors and their debut and follow-up films. Refreshing debut smash hits from around the world, recognized for their inventive, offbeat cinematic expression, which are screened as part of the popular section 360°, year after year fill the festival’s open-air cinemas to the last seat. The Fresh Danube Films section will also present some fantastic debut films and introduce the audience to the most gifted young artists from the Danube region. 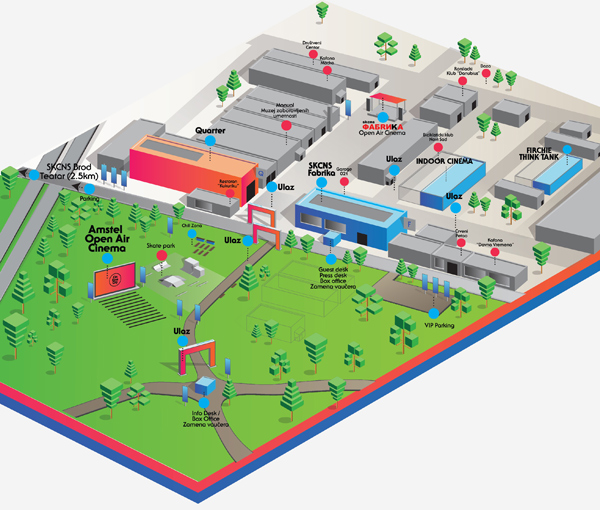 The ninth edition of the Cinema City Festival, which is to be held from June 25 to July 2 in Limanski Park and Chinatown, in Novi Sad, brings, as ever, a non-mainstream film selection which will be presented within delicately designed festival sections. The program concept of the festival is based on the promotion of debut and follow-up films and up-and-coming film talents, as well as on an excellent music program featuring some of the most important regional music stars.

As always, Cinema City visitors will have an opportunity to see some excellent films in their favorite section 360°, featuring the best debut films from all over the world! The impeccable program line-up was compiled by our selector Petar Protić, who promises the audience great cinematic surprises! Burn Burn Burn is a modern story full of love and emotion, directed by the talented British director Chanya Button. This black comedy charged with intense emotion is a narrative about two girlfriends who hit the road to honor the last will of their deceased friend, by scattering his ashes over some spectacular sites around the UK – a story which certainly will intrigue the imagination of the festival audience. Another outstanding cinematic achievement which will be screened at the Festival is a Scandinavian drama Parents, by the Danish author Christian Tafdrup. Parents is a curious story, examining the ancient mystery: how to fly the parental nest, but in a way which will be fair and acceptable to everyone. The Swiss-French co-production Aloys, by Tobias Nölle, brings an original study of individual loneliness, told through the story of a mysterious call and an introvert private detective, who becomes involved in a game of chicanery and intrigues.

California, a remarkable story of growing up, by the young Brazilian director Marina Person, deals with the troubles of adolescence we’ve all been through ourselves. Along with the great storyline, the music plays a pivotal role in this film, with an extraordinary soundtrack featuring massive international hits by the major music celebrities of the 1980s including The Cure, David Bowie, New Order, Echo and the Bunnymen and Joy Division. The French film Neither Heaven Nor Earth, by Clément Cogitore, is an overwhelming drama, with the elements of mystery, about the clash of opposing cultures and civilizations. In this film, the brilliant Jérémie Renier plays a French military commander who, losing the loyalty of his squad, also starts losing his sanity when his soldiers start mysteriously disappearing, one by one. Also check out One Week and a Day, a marvelous film by the Israeli director Asaph Polonsky, which will open the 9th Cinema City. Premiered at the Cannes Film Festival, One Week and a Day is a heart-warming, witty drama depicting human attempts and superhuman endeavors to find meaning in a life forever changed by a devastating event.

Awarded at the prestigious film festival in Rotterdam, film Radio Dreams covers a big day for a small radio station broadcasting from San Francisco – the legendary band Metallica is about to meet up for a jam session with the first Afghanistan's rock band – Kabul Dreams. But first, everyday life with its dry sense of humor interferes. This film was directed by the award-winning film director Babak Jalali. As part of the 360° section, we also present The Land of the Enlightened, a documentary by the Belgian author Pieter-Jan De Pue, which attracted a lot of attention at this year's Sundance Festival. This film depicts the surreal life of a group of children from the Kuchi tribe, waging their mini-war in the everyday madness of Afghanistan and, at times, running away deep into their own fantasies and dreams.

At the ninth Cinema City Festival, you should not miss the fantastic section Fresh Danube Films which will present the most thought-provoking works by talented debutants from the region. According to the Fresh Danube Films selector Vladan Petković, this year's selection “encompasses five films, two of which deal with female maturing – Zhaleika and Open Wound, and the other three are very interesting in terms of the form, because they all play with genres. WiNWiN is, in that sense, a meta-film about capitalism, Europe, She Loves is officially a documentary exploring love affairs in a very filmic, and rather fictitious way, and Eva Nová is a strong social drama, which draws a parallel between the fictional character and the actress playing that character.”

A film which will be representing the local film scene is Momir Milošević's debut Open Wound, and this will be its premiere screening in Novi Sad. “This mixture of a coming-of-age drama and a psychological horror by the young Belgrade director is the most pleasant refreshment in the Serbian Cinema in the last few years,” says selector Petković. The film tells a story about two teenage girls exploring their friendship and identities in the Serbia of the 1990s. The German-Bulgarian co-production Zhaleika by Eliza Petkova is a multiply-awarded film telling a story of a young girl bravely striving to live her life her own way and by the rules contrary to the tradition and customs of her community, but her endeavors are met with contempt and lack of understanding by the people around her. Our visitors will also have a chance to see the great cinematic achievement WiNWiN by the Austrian director Daniel Hoesl. This film is a modern yet stinging satire of contemporary capitalism and its representatives – people as sterile and replaceable as the money they worship.

The Swiss film Europe, She Loves, directed by Jan Gassmann, is a documentary about four couples on the edge of Europe, struggling with adverse economic conditions, their own personal demons and problems typical of all relationships. Another film which will be presented as part of this section is Eva Nová, by the Slovak director Marko Škop, a narrative about the life of once famous actress Eva, who is now a recovered alcoholic. They say – everyone deserves a second chance, but what if it’s too late for Eva…

The Cinema City Festival offers its visitors a unique opportunity to see those films which they won’t find in the regular cinema repertoires. The Festival cherishes the spirit of youth and strives every year to make the beginning of summer as magical as possible for its audience, so embrace this authentic film and festival experience in the revamped industrial district of Novi Sad!