All the Cities of the North 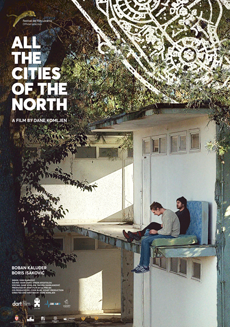 Synopsis:
A single, white room, a blue tent inside, where two men share a relationship no words could ever explain. Boban and Boris live in an abandoned complex of almost identical bungalows, amid stray donkeys, plastic bottles and red berries, reeds, tall trees and seasonal workers. A newcomer enters this secluded space and its everyday routine is disturbed. The outside world sets foot in this place bringing stories of different times, of cities to the north and south, of how something is made. New bonds are formed while old ones change. Love can be fragile when it doesn't have a name. No, don’t call me ‘comrade’. What should I call you, then?
Director:
Dane Komljen was born in 1986 in Former Yugoslavia. He studied film directing at the Faculty of Dramatic Arts in Serbia, and contemporary art at Le Fresnoy in France. His short films were screened and awarded in Cannes, Locarno, Rotterdam, Marseille, Sarajevo and New York. All the Cities of the North is his first feature film.
Svi severni gradovi / All the Cities of the North by Dane Komljen - TRAILER from everything works on Vimeo.